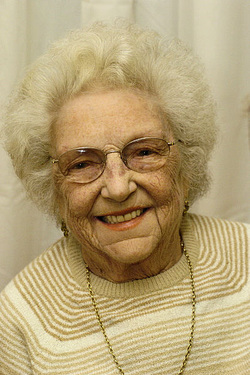 Mrs Peggy Wood, known to everyone as Peggy, began raising funds in 1980, when her grandson, Danny Chandler, was diagnosed with leukaemia at the age of two and a half.
Appalled by the lack of medical equipment to treat him in his home town, Peggy began what would become a long campaign to equip Maidstone Hospital with life-saving equipment for their cancer patients.
From 1980 until her death in 2006 she was the inspiration in raising £3.5 million through her charity, the Kent Leukaemia and Cancer Equipment Fund. Her husband, Fred, gave her the first donation of £100.
She helped set up the area's first self-referral breast screening service for women over forty and an ambulance service to take sick children to and from London for treatment.
In April 2004, Maidstone Hospital unveiled its £3 million breast care centre, which was named after Mrs Wood as a tribute to her efforts.
The charity was renamed the Peggy Wood Foundation in praise of her fundraising efforts on behalf of the thousands of patients she helped. the present chairman Bryn Annis has been running the charity for over 8 years now