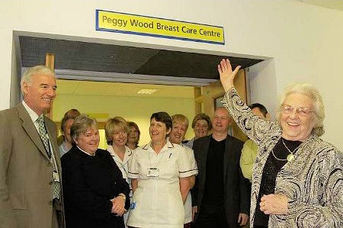 Opening the new centre. Photo by courtesy of the Kent Messenger
The Peggy Wood Breast Care Centre opened at Maidstone Hospital on 26 April 2004.
The £3 million centre, the most advanced of its kind in this country, was named in Mrs Wood's honour by the Maidstone and Tunbridge Wells NHS Trust as a thank-you for her vital fundraising efforts for the unit.
Dr Ali Sever, leader of the breast screening team at the unit, said: "There isn't another breast screening unit in the country better equipped than the new centre at Maidstone Hospital and that is thanks to Peggy."
The breast care centre includes six consulting rooms, a treatment room, two counselling rooms, three mammography rooms, two ultrasound rooms and a prone biopsy room.
Mrs Wood, whose equipment fund has donated hundreds of thousands of pounds worth of breast cancer equipment at the Maidstone Hospital over the years, said: "I am honoured that the centre has been named after me. I am so grateful to the local clubs, pubs, schools and everyone else for their kind donations. Everything we have raised over the years for breast screening has paid for, and continues to pay for equipment to improve our local breast screening services."