The Gratitude of Parents 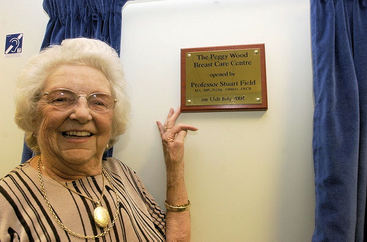 Photo by courtesy of the Kent Messenger
Like scores of other parents, Hazel and Gavin G (not their real names) say they owe a huge debt of gratitude to Mrs Wood. Mrs G said: "I was first introduced to Peggy Wood in 1997 by Maidstone Hospital when my son Jack, then aged two-and-a-half, was diagnosed with a brain tumour."
Jack was transferred to Great Ormond Street Hospital in London for surgery and treatment.
The family was offered help by the Kent Leukaemia and Cancer Equipment Fund, now the Peggy Wood Foundation, which Mrs Wood had set up in 1980 after her own grandson, Danny Chandler, had been diagnosed with leukaemia.
Mr and Mrs G, of Maidstone, were offered transport to and from the hospital in the Children's Ambulance run by Mrs Wood.
Mrs G said: "At one point, we used the ambulance every day for six weeks. It used to take us up there, wait for us and bring us home. We weren't alone. There were lots of other families in and around Maidstone with children with cancer and leukaemia who relied on the ambulance. Peggy not only provided support to us but became an important part of our family and referred to my son as 'Little Jack."
Mrs Wood nominated Jack for a Ward and Partners Children's Award in 2003. He won the "Triumph over Adversity Award".
"Jack affectionately called her Peg, which made her laugh. She was like a second nan to him and we will always have a place in our hearts for her. She was a lovely, wonderful woman," said Mrs G.